Getting Started with Crosslight Charting

One of the greatest new components in Crosslight 4 is a powerful, full-fledged Charting component, enabling Crosslight developers to easily add stunning charts to their business cross-platform mobile apps. Fully MVVM capable, it works beautifully across iOS and Android platforms. 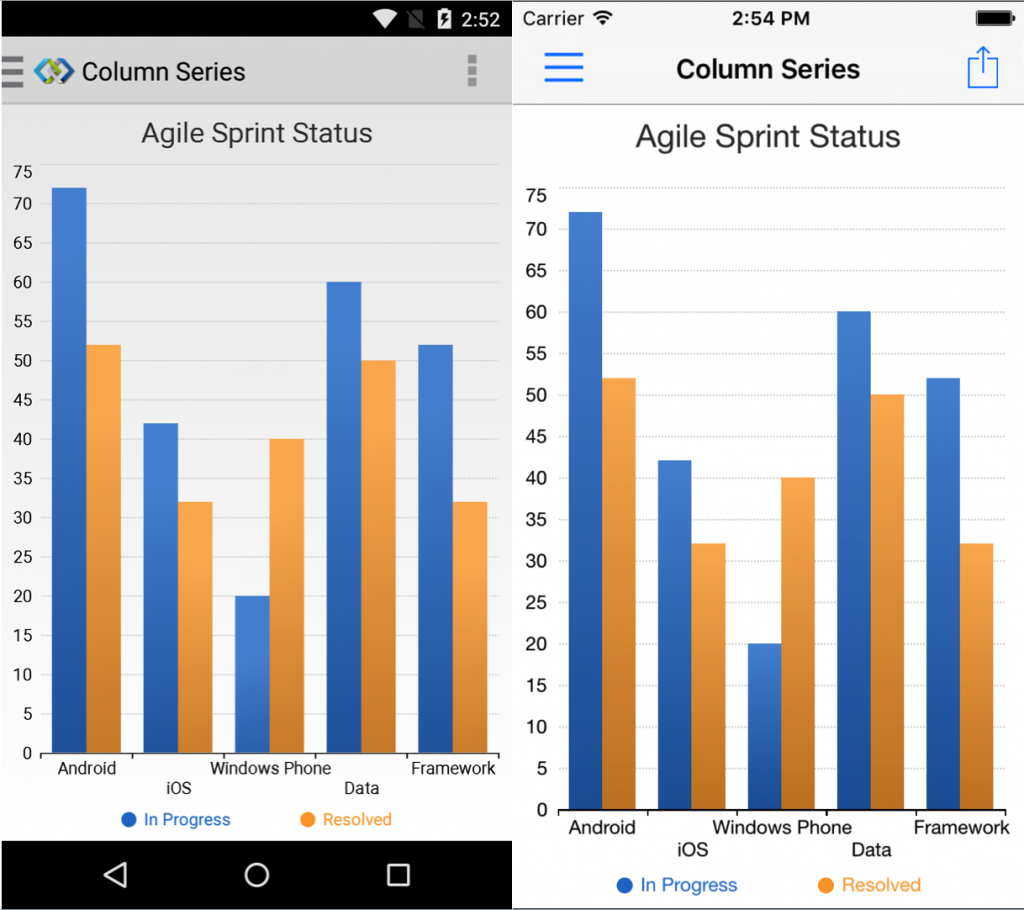 Let’s try to create the illustrated column chart from scratch. To start off, I created a Blank Crosslight project with Crosslight Project Wizard. I’ll call this CrosslightCharting for now. After the project is created, don’t forget to add the necessary references as well. 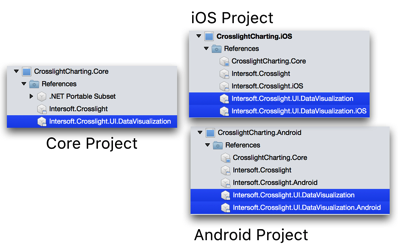 Let’s prepare the ViewModel that will provide the data to the chart. I’m going to create a ColumnViewModel class inside the CrosslightCharting.Core/ViewModels folder, and write really simple code to initialize the Chart model. Here’s how.

As you can see, all we did is simply initializing the chart in the ViewModel and populated two ColumnSeries for it, and add the data points for each series which will be displayed side-by-side. Crosslight Charting library includes component models that you can consume in the shared Core project. The Chart model represents the data source required for the chart, and also provides a wealth of chart configuration and settings. The Series, ColumnSeries, and DataPoint are another example of the component models available in the Charting library.

For the sake of simplicity, the above sample uses static data points as the items source for each series. If your data points are heavily reused across your application, you can definitely refactor the data points into a repository or data manager class which you can easily consume with a simple method call. Later, you can learn more about it from my sample project.

It’s also noteworthy to point out that changes to the Chart model will automatically propagated to the view, thanks to the powerful binding architecture of Crosslight. This means you can add or remove Series dynamically in your app. Of course, you can also set the items source of the Series later in the app’s cycle, such as after fetching data from the server in most real-world scenarios. Better yet, changes you made to the Chart model will not be only propagated to the view, they will be also smoothly animated from the current point to the new point. Absolutely no additional code needed, it just works!

For your reference, here’s a code snippet how to initialize the items source of a Series combined with an async data load.

Crosslight Charting emphasizes not only on powerful charting capabilities, but also provides developers with easy-to-use and intuitive APIs, so you can get things done without having to worry about the heavy work. If you notice, you don’t necessarily need to define the dependent and independent axes for the chart, since Crosslight Charting comes with automatic axis detection that generates meaningful axis and range, purely based on the given data. Simply beautiful.

Since our ViewModel and Chart model is ready, let’s prepare the Binding Provider which will bind the Chart model to the view. This is where the magic will happen.

There’s not much to explain here as the code is self explanatory. It simply binds the ChartView to the Chart property of the ViewModel. That’s it. Now you have the ViewModel with complete data populated as well as the BindingProvider.

Creating the Chart for iOS

Simply run the project to see the Crosslight Charting in action. 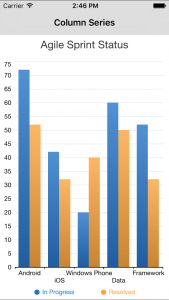 Creating the Chart for Android

Well, since you’ve prepared the ViewModel and the BindingProvider, so, as you guessed it, all you need to do, is just to provide the “view” for Android platform. Let’s create an Activity for that. I’ll call it ColumnActivity, and put it inside the CrosslightCharting.Android/Activities folder.

Again, nothing’s here except for the ViewModel and the BindingProvider we’ve created earlier. As you can see, I’ve provided a layout for this activity by creating an Android layout file inside the CrosslightCharting.Android/Resources/Layout folder, called ColumnSeriesLayout.axml. Let’s see how this file looks like.

The layout is simply a ChartView that covers the entire screen. I’ve also put a white background to get better visibility of the chart. Android version is done. Let’s see it in action. 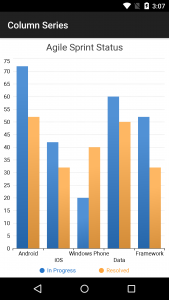 Now, I want you to pay attention to how Crosslight Charting manages to create the axes automatically for you, and define the “smart” ranges for those axes that fits the screen nicely. Also notice that the legend is automatically generated for you based on the given data points. How cool is that? See, I told you that it works consistently between iOS and Android platform.

And if you need to customize anything about the Chart, whether its data source, series, or other settings, you do it only once in the  ViewModel. At this point, I hope you’ve started to get the point how Crosslight works in overall, and how it lives to its highly acclaimed 100% shared UI logic.

If you’re interested in learning more, I highly suggest you to check out the list of topics here:

I also highly recommend you to check out the samples directly to see all of the features hands-on. It is available in the Git repository in this link.

You can also find the source code to this our Git repository here.